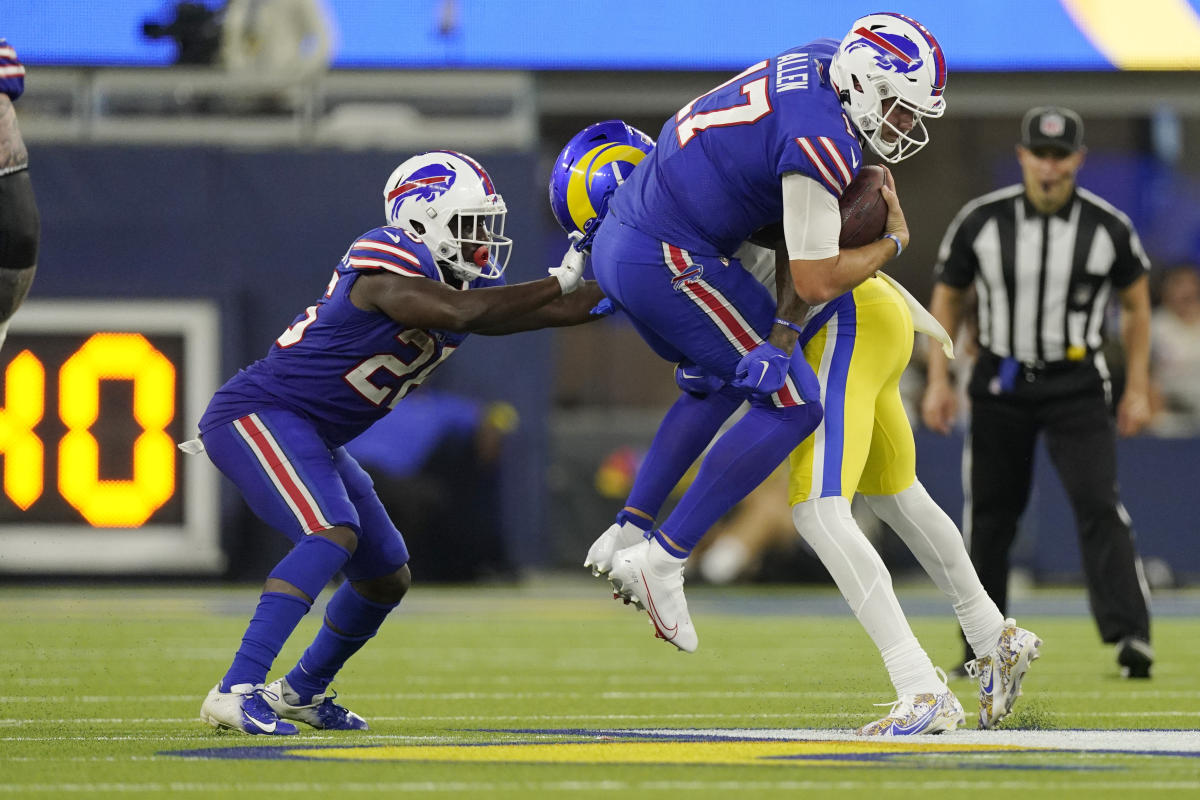 Josh Allen looked like an MVP candidate in week one defeat of the Super Bowl champion Los Angeles Rams.

The Buffalo Bills quarterback showed his hand in a 297-yard, three-touchdown effort that even an All-Pro cornerback Jalen Ramsey had no answer. The precision that has become a hallmark of his development as an NFL quarterback is reflected in an 83.9% (26-of-31) completion rate that a franchise record for a regular season game.

When the Rams took away the deep ball, he didn’t force it. When they are not he made them pay. And when did he run away? Well, good luck.

That style of play is also the biggest source of discomfort in Buffalo. Allen led the Bills in rushing Thursday with 10 carries for 56 yards, including a 4-yard score. There were multiple occasions where he appeared to be seeking contact. In doing so, he exposed himself to repeated physical punishment that raises short-term and long-term concerns for his health.

Can Allen stay healthy with his style of play?

The short-term concerns are obvious. The Bills entered the season as Super Bowl Betting Favorites. Nothing since week 1 has changed that status. Buffalo has a stout defense, a respected head coach in Sean McDermott and a talented playmaking corps that includes Stefon Diggs, Gabe Davis and Dawson Knox.

But make no mistake. Allen is the No. 1 reason for Buffalo’s status as a Super Bowl favorite. If he suffers a significant injury during the season, Case Keenum would take over at quarterback, and Buffalo’s championship dreams would be all but dashed.

Allen is aware of the concerns. His physicality has been a prominent part of his game since joining the NFL in 2018. He addressed them Wednesday after last week’s performance in front of a prime-time crowd once again raised concerns.

“I think I can do better in that regard,” Allen told reporters at a press conference on Wednesday. “But given the circumstances as they were, understanding the flow of the game, sometimes I do things that in my eyes are necessary to help our team win a football game. That’s all.

“But at the end of the day, availability is the best ability. So just understanding that — and going down and not taking too many hits, obviously it’s year-to-year.”

Allen’s “year-over-year” recognition addresses long-term concerns. Even if he gets through this season relatively healthy and with a Super Bowl ring, the cumulative effect of the concussions he’s enduring is sure to take a toll. Look no further than Cam Newton.

Newton exceeded the expectations that came from his status as the No. 1 draft pick as his unprecedented skills resulted in Rookie of the Year honors. His 706 yards and 14 touchdowns alone would put him in contention for the award.

In each of his first five seasons, he ran more than 100 times a year with rushing totals ranging from 585 to 741 yards. At his best in 2015, he was the league MVP leading his team to the Super Bowl. He was a Pro Bowl-level running back and Carolina’s best single-package rusher.

But it was not sustainable. Injuries piled up. His performance showed signs of declining in 2016, a year after his MVP campaign and his sixth season in the NFL. In 2019, he admitted it he played through lingering shoulder problems since that 2016 season, a period in which his accuracy on the field declined. It wasn’t just his shoulder. There were just as many foot injuries, walking boots, concussions and ankle surgery.

In 2017, anonymous team officials whispered worried that his body was falling apart. In 2020, team owner David Tepper said the silent part out loud when asked about Newton’s future with the franchise. His answer: – Is he healthy?

He didn’t. Newton played in just two games last season, and The Panthers were finally released the best player in franchise history after nine seasons in Charlotte. Newton took over for Tom Brady in New England in an eight-touchdown, 10-interception campaign that fall before returning to Carolina for what amounted to a nostalgia tour as Sam Darnold’s injury replacement in 2021. One week into the 2022 campaign, Newton not on an NFL roster.

This is a fate the Bills want Allen to avoid. In his first four seasons, Allen averaged 105.5 carries and 581 rushing yards per year. Most of those carries end in a score. That’s in addition to the 118 sacks and additional back hits he suffered. He has remained relatively unscathed thus far, as Newton did through his first five seasons.

Does Newton’s career trajectory mean Allen’s will follow the same path? Of course not. But these parallels are impossible to ignore. Meanwhile, Allen’s physical heroics on the field continue to draw well-deserved praise and celebration.

There is no easy answer as Allen’s game continues to bring wins and highlights. But both Allen and the Bills must find the right balance.